The Continuing Mystery of Bruno Schulz 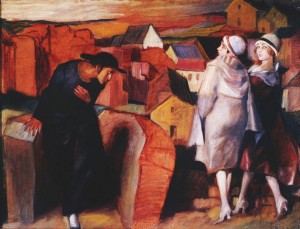 The great writer and mystifier Bruno Schulz left a plethora of puzzles, myths and hidden chambers in two thin booklets of essays. However, one of his lesser-known and most challenging riddles was forgotten under a thick layer of paint in one of the former villas of Drohobych.

Bruno Schulz has emerged as one of the most important writers and innovators of the Polish language in the 20th century, his works translated into 39 languages. He was born in 1892 in the then Austrian (later Polish and now Ukrainian) town of Drohobych to Jakub Schulz, a Jewish cloth merchant. The provincial oil town on the outskirts of Poland and the fading visionary image of his sick father later became the key characters of his magical metaphorical prose. Apart from being a writer and a painter, Schulz was earning his living as a school teacher.

END_OF_DOCUMENT_TOKEN_TO_BE_REPLACED 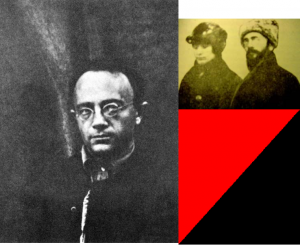 The Jewish activists played an important role in the revolutionary movement, which originated in the Russian Empire at the turn of the XX century and eventually led to the Bolshevik Revolution of 1917 and the establishment of the USSR. Some opposers of the revolution even labeled it the ‘Jewish’ one, due to a substantial number of Jewish people (Leon Trotsky being the best known example) behind the turnover. This period of Russian history was indicated by a massive rise of various movements. Workers, communists, anarchists, zionists, independence fighters were all starting their fight. Many of these were indeed lead by Jewish people or actually were Jewish movements (like zionism or BUND , Jewish Workers’ Union). Some memories have survived the massive repressions of the 1930s, which have demolished what was left of the revolutionary spirit. Some were completely forgotten. Aron Baron was probably one of the most rebellious and   unchained leaders, causing unrest in any place he arrived to. But while many were fighting hard for the new government to take power, Baron’s life goal was to fight any form of government, power and order.

END_OF_DOCUMENT_TOKEN_TO_BE_REPLACED 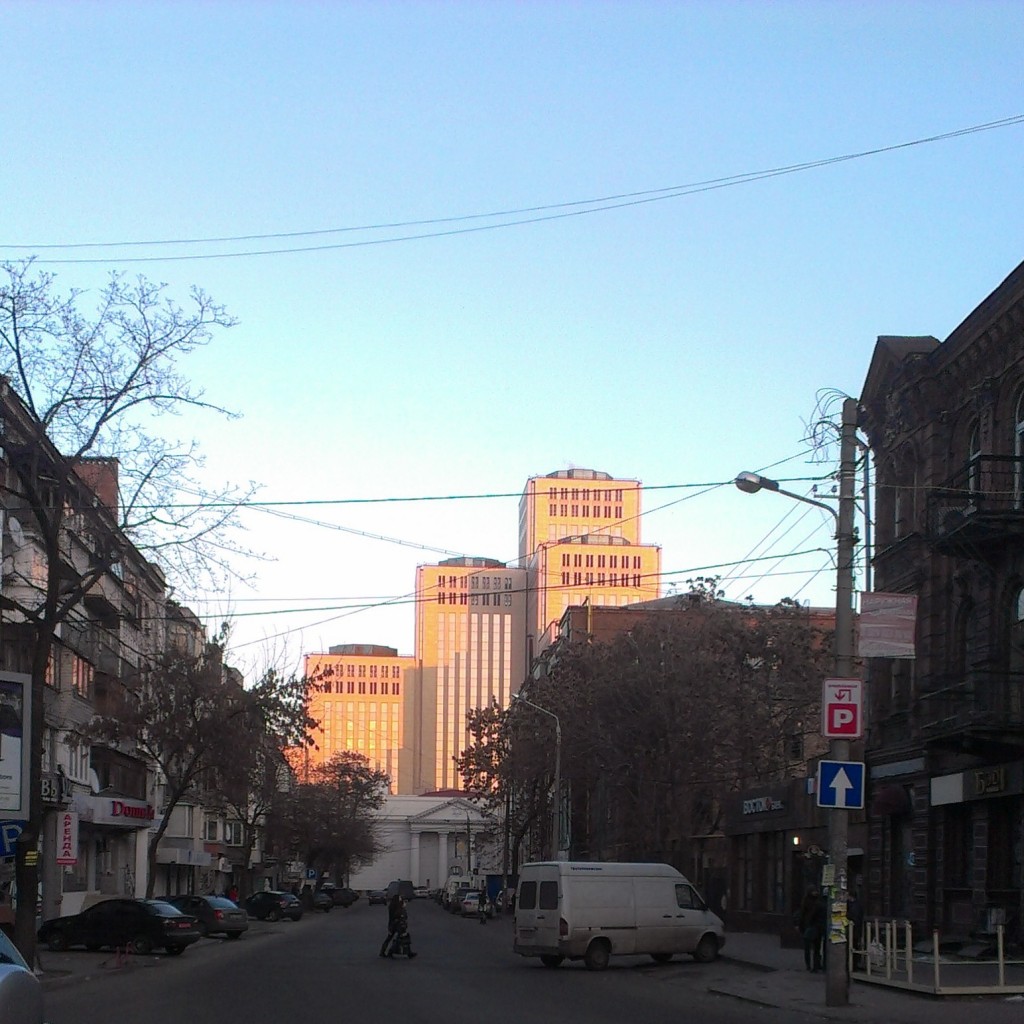 END_OF_DOCUMENT_TOKEN_TO_BE_REPLACED

A Jew and a Zhyd

A Ukrainian-born American actress Mila Kunis could have become a real pride of the country and join a beautiful company of other Hollywood beauties of Ukrainian heritages (listing her namesake Mila Jovovich, Bond girl Olga Kurylenko and many more). Instead, she unwittingly became a part of a nationalistic provocation.

It’s not that Ms Kunis is not talented enough to be an example of a Ukrainian success story in Hollywood. It’s just that some people strongly believe that a person can only be either Ukrainian or Jewish. Mila belongs to the second group; hence, it’s Jewish people who can be proud of her if they wish, but not Ukrainians.

END_OF_DOCUMENT_TOKEN_TO_BE_REPLACED

Dickens’ ‘A Christmas Carol’ is not only the best, but also the most heartwarming and secular Christmas tale ever written; thus being a great pre-Rosh haShana read for a nice Jewish boy like me. It’s also a great read for anyone who is eager for some revelations. The first chapter, ‘Marley’s Ghost’, doesn’t intend to tell the afterlife of the reggae legend; Camden Town wasn’t always inhabited by hipsters; and English language used to sound quite different some 200 years ago. Finally, the most shocking fact – name Scrooge wasn’t at all invented by Walt Disney. Scrooge McDuck is merely a cartoon interpretation of Dickens’ repentant and Christmas-ignoring miser – Ebenezer Scrooge.

Scrooge could have been Jewish – Dickens’ ‘Oliver Twist’ already features a Jewish villain called Fagin, more often bluntly named as ‘a Jew’. Is Scrooge not stereotypically Jewish enough? There’s something even more Jewish about him – his name, Ebenezer. Here’s some wiki on it:

The word “Ebenezer” comes from Hebrew and is actually two words pronounced together: Even Haezer. It is usually transliterated as a proper name by dropping the definite article (Ha) from the Hebrew word for “help” (Ezer) and putting it together with the Hebrew word for “stone” (Even) to create: “Ebenezer.” The etymological roots of the word, thus defined, should demonstrate that an “Ebenezer” is, literally, a “Stone of Help.” The Biblical Scripture reads as follows:

Being a Biblical name (just as David or Michael), Ebenezer is the only Hebrew thing attributed to Scrooge. Luckily.

Ignore Hitler or Hooray for the Nazis? 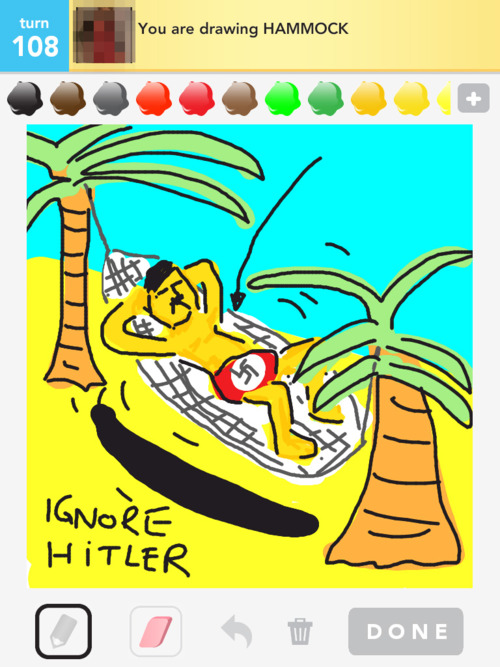 Both, and probably at the same time. Yes, the most satirical blending of two quite ridiculous and shockingly similar ideologies of the XX century Hipster Hitler with their quarterly blogging is not the web Hitler leader anymore. Michael from Scotland ignores Hitler couple of times a day by posting cute drawings of the Führer in his blog. Other  users play the popular smartphone game ‘Draw Something’ in the most boring way by simply drawing an object his or her partner has to guess, just as the rules suggest. Michael’s partners have to find the guessword somewhere on a Hitler picture, while Hitler himself, as the line below the image hints, needs to be ignored. Some 2.100 Facebook followers are watching a neverending comicstrip of the dictator’s misterious interactions with different objects, while the Tablet Magazine journalists are trying to see the signs of the great psychological liberation from the shadow of Holocaust in this new and weird trend.

In another part of the British Islands satirical journalist Charlie Brooker recommends us to be careful when shouting out ‘Hooray for the Nazis’ for a YouTube video.

Of course, Brits are officially the only nation (besides Jews, of course) allowed to joke about Nazis, simply because they are allowed to joke about anything (since they do it oh so well and actually there’s absolutely no way to prohibit them from joking). It doesn’t even matter why we laught anymore. Whether it is because a Hitler joke is still a freightening forbidden fruit, because any dictator is comical in his very essence, because we are happy to be able to laugh at it or just because a good joke needs no justifications. 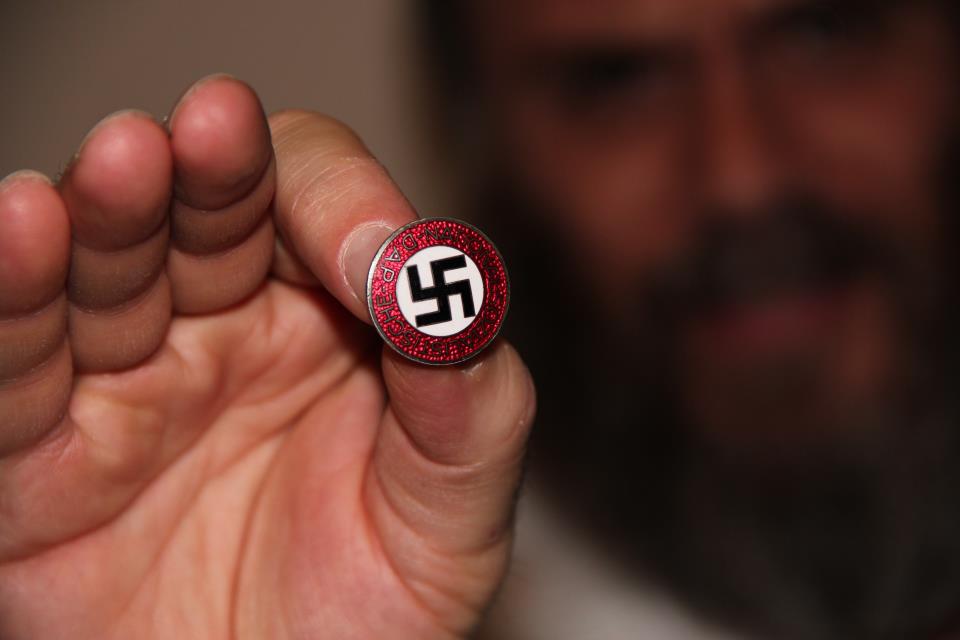 On the 4th of April 2012, the very day when Günter Grass’s anti-Israeli poem ‘What Must Be Said’ was published, my friend rabbi in Vienna found a Swastika badge in his vacuum cleaner after Pesach cleaning. It happened, of course, by a coincidence; just like by a coincidence is Grass notorious for his SS past; and again, by a coincidence did the owners of the rabbi’s flat left the badge in there. Any attempts of drawing connections here is a sure sight of persecution complex and an unnecessary digging up the past. The problem is that such coincidences take place.

Almost 70 years have passed. Today, when public apologies for Nazi crimes are being tendered on any suitable occassion by people born after the war and klezmer melodies are filling the streets of Berlin and Nuremberg, bringing up any Nazi topic seems to be a moveton, a mockery, a pointless agression. It is forgotten, since all of us wanted to forget it. Yet it’s still there. It is there because the SS soldier considers himself to be impartial enough to voice his opinion on the actions of the Jewish land. It is there also because many Israelis, provoked by Grass’ poem, are immediately starting to recall the past of 84-years old Nobel prize owner and his nation. Finally, it is there because of some people in Vienna, who neither decided to save the Swastika badge as a family relict, nor to get rid of it. It has been lying on the floor of their appartment, waiting till a rabbi find it during a Pesach cleaning. English translation of the poem: here

“So you are going to Slovakia to make a report about Jewish Winter Olympics in the mountains? Well, a kind of strange excuse for a winter vacation, Ian.”

Indeed, why did I go at all? I never liked sports, I’m not any kind of sport reporter at all, I don’t really get fascinated by mountains, especially when it’s below -20 C. After all, I met some people from local Jewish communities already and wasn’t expecting to hear anything new. When a cog train brought me up to the place called Štrbské Pleso, which name I could hardly pronounce partially because of its frosty climate, my only wish was to hide myself in my hotel and magically reappear in another hotel some 800m away, where the games were taking place.

Maybe the reason why this event surprisingly became my warmest memory of this cold winter was the warm welcome and helpful assistance, which were offered to me by Petra Mullerova, a friendly and active young lady behind the whole organizational process of the Slovak Maccabi Games. Another reason might be the stunning beauty of the High Tatras, the mountain range surrounding the spot. The third segment is finally the home atmosphere of the the largest Jewish event in Slovakia, which seem to avoid any kind of formality or pomposity. 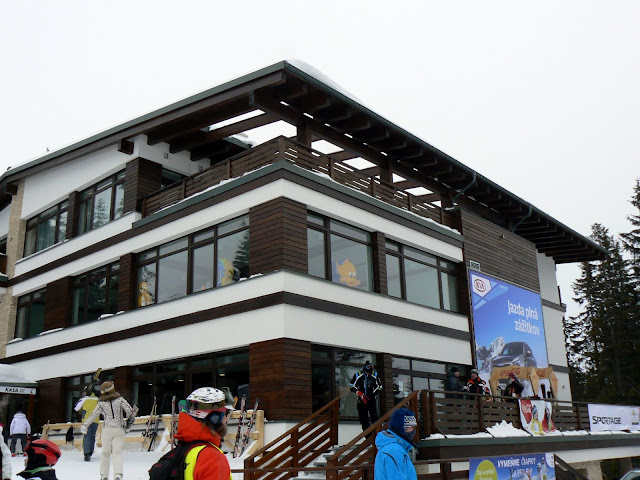 END_OF_DOCUMENT_TOKEN_TO_BE_REPLACED

What would you think of talking about sex in Krakow Jewish Museum? As for Mark Lazar, it’s just a right topic in a right place. And sitting at his seminar ‘Sexual Ethics in Judaism’ just next to an exhibition on abandoned synagogues and Jewish cemeteries of Polish Galicia, ‘provocation’ would be the last thing you think about. Relevance, humor, preciseness, openness.

Mark might look as a rabbi or a hippie, though in fact he is not. His stories may sound like teenager jokes and profound religious treaties at the same time. Speaking on sexual ethics, he goes from biblical examples to modern laws and rules, supporting it with various quotes both from ancient Jewish manuscripts and today’s rabbis and Jewish thinkers.

- Mark, thank you so much once more for agreeing to give this short interview. What surprised me the most during my research was your involvement in numerous different projects and having lectures on numerous topics. Tell me more about it: how did you start, how do you manage it and what are the things among those which are the most important for you personally?

- I guess one reason why I’ve been involved in different projects during the past years is getting older, as I get more time to do it (smiles). Also I was never good in formal education, so when I started college in the early 70s to study theater, for me it was much more important actually to do theater. Most of what I have done was self-taught. I love teaching, I love engaging ideas. I always try to learn more. I like writing, I like having a lot of different jobs. What is very important for me is working with people. I want to help people look at themselves, to grow – whatever age they are, to examine themselves, to try to be the best person they can be. I find it in a Jewish context, but I think it’s universal as well.

- I see you have been involved in different things from young age. Was it always connected with Judaism?