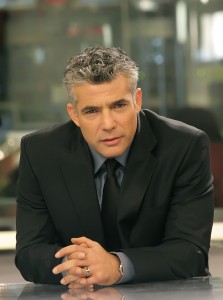 For those of you who don’t know much about Lapid, here are a few insights into the leader of Yesh Atid, who looks like he will be THE big player on the Israeli political scene. Lapid is kingmaker to King Bibi.

Lapid  says he knows Israeli politicians well from covering politics for many years as a journalist, and he’s “not afraid of them.” I wonder though about his staying power: just how much fight does this former amateur boxer have in him? Because listening to his fighting words, especially against the current political system and pretty much every single serving Israeli member of Knesset [especially the religious MKs but not just them], I predict that Yair Lapid is going to get into the fight of his life – whether he joins the next coalition or stays in the opposition. And it’s going to be a long and ugly fight, so it’s just as well that Lapid said he’s going into politics for the long run. “It’s my second career and there won’t be a third,” he says.

He says he’s going to be a good, thorough, and professional politician, that he’s going to take it extremely seriously, and stuck to his promise of not recruiting any serving Israeli MK into his new party.

Like US President Barack Obama when he ran for his first term, Lapid is someone who is banking on a message of change; change in the political system, change in the nation’s fiscal and social priorities, change in the education system, change to the rules of national burden: he promises that he will work for seismic changes to the national fabric of Israeli society: the ultra-Orthodox must serve in the army or national service and they must join the workforce etc.

But like Obama, Lapid may be creating too many expectations, and might suffer from this down the line when he’s faced with the harsh realities of the Israeli political system, and the expected economic downturn and massive budget cuts the next government will have to implement.

But for now, Yair Lapid is clearly enjoying himself. He’s enjoying “telling the truth” as opposed to politicians’ necessity of messaging and towing party lines. He’s enjoying motivating people and firing up the discontented secular middle class.

Like Obama’s first campaign, Lapid crowd-sourced his campaign, mostly on the Internet. His Facebook friends asked him questions, and he sat all night and answered them. I followed one of his staffer’s Instagram account, and I can tell you that Lapid held at least one parlor meeting every day somewhere in the country. Every day.

He surrounded himself with young and hungry operators  who recruited volunteers by the thousands. He set up working groups and committees for separate issues and he didn’t stick just to Tel-Aviv.

I’d say Lapid is branding himself into the ‘outsider promising change’ mold. He keeps a photograph of his father Yosef Tommy Lapid meeting with Obama. Yair Lapid often talks about his father, and the lessons the Jews need to learn from the Holocaust. Lapid is no dove. There’s no doubt that Lapid sees himself one day as prime minister; he knows it won’t be in these elections, but he’s willing to wait.

Oh, and by the way, Lapid gave his victory speech tonight from a teleprompter [like Obama], the first Israeli politician to do so.