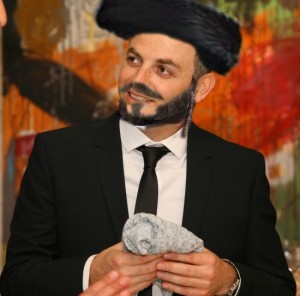 I’ve always been told that I have a Jewish neshoyma, and I think it’s time to bring it out of its hiding place, deep within my secular chest, out into the open. I’ve often spoken to God, wherever and whenever I found the time and need to. But now I can talk to him at fixed times, and at fixed locations, with the right words, legitimately, not, you know, on the fly, as I’ve been doing.

I’ve spoken to my wife about it [probably the last time I'll do this now] and we both agree that it makes perfect spiritual and financial sense for both of us to become ultra-Orthodox and raise our children frum. Lots of little frum children. She’s happy to spend the next 15 years of her life going from pregnancy to pregnancy, really she is.

The truth is that we can longer afford to remain secular.

When we become haredi we’ll get free housing, I won’t have to do reserve duty anymore, I can quit my job, join a koylel, read and learn and argue all day with guys just like me, the rebbes [the geniuses!] will make all of our important financial, personal, and political decisions for us [what a relief, this was all getting so complicated] and I can also stop worrying about my son having to go to the army one day or make a living for himself. Maybe he’ll want to grow up to be a rabbi? When I was tiny I dreamed of becoming an astronaut. And look where that got me! I can’t even afford a tourist ticket to space! And NASA is only sending drones and little cars to space, not astronauts anymore. Much better to become a rabbi and get closer to God in the heavens that way – I’m serious, enough of this luftenmensch dreaming. I’ll stop being such a chochmolog, an oyberchoychem.

My wife says I have good midos, and she promised to work on her tznius. I said I’d eagerly help her with this. I thought I’d volunteer in the community, maybe with a modesty patrol in the neighborhood.

We’ll sell her bike, and use the money to buy her a nice, modest wig. I’ll grow my beard – I’ve seriously always wanted to do this.

What else do we need to do? Our kitchen is already kosher, but we can always tighten this up. We’ll look for Badatz stamps on food, is this kosher enough?

Once I get rid of all my secular clothes I’ll go look for some sleek black suits and a furry black hat. I don’t want to blow my own Shofar, but I think I look dashing in dark suits. Baruch Hashem summer is coming to an end, I reckon I’ll need to ease into this, it’s hot in these suits.