Viennese Cowboy in the Middle East

The two brown horses gallop lightly on the famous Viennese Ringstrasse. Calmly, ignoring all the cars driving by, from left and right. “This part is called Karl-Lueger-Ring, after the former Mayor, who happened to be a big Anti-Semite. Last week I heard that the city is going to rename it – justified I must say”, the carter explains, surprisingly in Hebrew! Well, not an academic Hebrew, “but good enough for the kitchen”, he admits.

His name is Rupert Adensamer. He’s 34, has a second degree in the History of the Middle East, originally Viennese or a ‘Wiener’. Most of his life, he has spent among his horses. For the last three years he was occupied with conveying the story of the Austrian capital in the most authentic way: on the horse carriage. But one thing separates him from his other jealous carters: Rupert has a connection to Israel; such as only the ones who crossed it on a horse’s back could understand.

Rupert Adensamer first came to Israel at the age of 22, in the frame of a national service, instead of going to the Austrian military.“ I worked for the remedial community ‘Kfar Rafael’ in Beer Sheva. There I lived exactly like in a Kibbutz”, he remembers, “and as the time went by, I learned the language from the residents.” This mission that ended after 6 months became a casual thing as Adensamer continued coming every few months during his vacations from the university. “It was the time of the second Intifada, and rockets started falling in southern Israel. Since there was a difficulty with recruiting more volunteers from Europe, they kept on calling me. I was always very happy to come.” 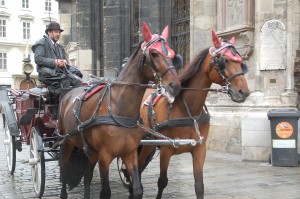 Eventually, it was a relationship with an Israeli ‘Kibbutz-Girl’ that led him to a new passion: horses breeding in Israel. “My girlfriend’s dad sympathized Shagya Arabian horses, exactly the same type that my family has been breeding for the last 40 years. So I offered that we open up a stable in the Kibbutz. We started with 3 horses that my family gave us. Today I have 11 horses together with other Israeli partners.”

A: “From the beginning I said that it won’t turn into a business. It’s all about a vision, a family, about blind love to horses that brings people together despite their differences. An in the middle-eastern reality – this is a very important asset. Even though, we do train the horses to compete in ‘Endurance’ competitions for distances of 120km and more. These contests are very popular in Arabian countries, like in Jordan, where even Israeli groups take part in.”

Q: Is there a difference between owning horses in Israel and in Europe?

A: “The big difference is that in Europe, you could actually make a living out of it. In Israel there is a very young tradition in this field. Israelis tend to focus too much on the final goal, not on enjoying the road to it, and in the meanwhile they complain that the horses are not fast enough. Also historically, Jews had never the image of horsemen. Besides that, I’m always worried about thefts. Last week, somebody tried to steal a few of my horses in Israel. You need to understand, that each time a horse gets stolen, there goes also his genetics. These genetics are crucial for the race’s breeding. That is why I keep my horses in different stables. The positive side is that in the center and the north of Israel you have the ideal conditions for the horses. I think that I would be happy to be a carter along the beach of Tel Aviv.” 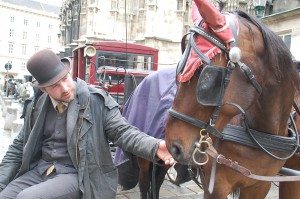 At a certain point, the carriage turns away from the Ringstrasse and enters the old city of Vienna. “Here was the Emperor’s family residence during the winter”, Adensamer announces while maneuvering between hundreds of curious tourists, and then he asks: “do you see this balcony? It was installed by order of the Baron Wilsczeck, so it will face directly Sissi’s bedroom window.”

Q: How do you adjust the content of your tours to the different tourists?

A: “Sometimes the people I take with me are not interested in history. In case they do, I try to put up a comedy show while adjusting the content to the nationality. For instance, the Argentineans are interested in Sigmond Freud’s old house; the Japanese want to know everything about Mozart. The Arabs are more interested in Shopping. The Israelis are the noisiest, but they also have the best mood. They always think that I try to fool them, but once I start to talk in Hebrew, they already ‘feel at home’ and I become a part of the family.”

Q: So you’re addicted to the Middle East.

A: “Look, everything that happened in my life regarding this region was a coincident. I wanted to study history, and if you keep your eyes open, there’s no way that you miss this tensed topic. I think that Israel is, without its fault, too much in the focus of the international media. Like there aren’t any other disasters in the world. I also noticed that we in Europe are much more stressed about the possible war with Iran than Israel. Because you have bunkers.”

Q: Do you see how the world politics also affect the world of horse breeding?

A: “Through horse breeding you can save entire races that almost disappeared due to the world wars. The Lipizzaner species, which are so beloved by the Austrians, were almost extinct after WW1. Only the devotion of one man saved them. Or for instance: in the 18th century, the horses back then were considered to be too heavy for their role in the postal service and in the military. To resolve this problem, different Arabian species were brought from the Middle East to Europe. The horses became then lighter and more human friendly – a real ‘Arabization’ process. It came to the situation in which the Bedouins have sold their entire species. Only in 1994 they managed to save their horses from extinction, thanks to the water distribution agreement attached to the peace treaty with Israel.“ 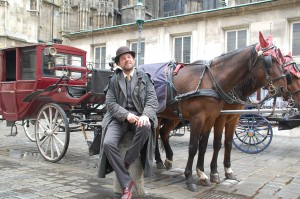 Q: And there is probably a lot of politics in the world of carters.

A: “Everybody here is equal. But once there is someone who has a wrong attitude towards the job, the things will be addressed directly to him. Women have it actually much easier in this job. Carters have also a bad image in the Austrian society: either we are gamblers and alcoholics, or we are technology deniers. Which is sometimes not far from truth. Each and any one of us has also a nickname. Mine is ‘Herr Magister’, after my academic degree. When they want to hurt me, they call me ‘Judenschwein’ (Pig-Jew). It started when I tried to help an Israeli lady during an argument she had with one of my colleagues. After I spoke to her in Hebrew, the other carter became angry since he thought that I tried to arrange something behind his back. Some of the carters here do not understand that the fact that I speak Hebrew and lived in Israel, does not make me Jewish. But they don’t care. It made me understand how deep the Anti-Semitism is rooted in the minds of some Viennese. Even when my friends in Israel told me how common Anti-Semitism in Austria really is, I couldn’t believe it. Until I experienced it by myself. You know what, for this kind of people I’ll be a Jew on purpose.”

Q: Why did you choose this job, even though you’re academic?

A: “First, I earn here much more than in the academy. Second, after many years of travelling, I had to stabilize my life. I reached the conclusion that I prefer to be with my family and my horses, especially when they eat, and I can relax with them. And indeed, I managed to build my own urban Kibbutz in the middle of Vienna: I don’t need my phone because everybody know where I am, I don’t have traffic problems, I don’t need a parking lot. I have the perfect balance between city and nature. But still, this job takes over your life: while everybody is on vacation, I need to work. When they are at work, I need to take care of the horses. Either you are a carter for life, or none.”