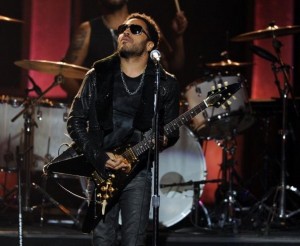 Following reports in Israeli media outlets, singing legend Lenny Kravitz confirms he is headed to Israel, as part of his 2012 tour, in support of his latest ninth album “Black and White America”, which was released last August. Kravitz says he is excited about hitting the holy land for the first time as a performer, but has yet to release any information regarding a specific date. He has also confirmed unspecified tour stop in Australia and Europe.

In a recent interview promoting his role on the eagerly anticipated film “The Hunger Games”, out next weekend domestically and internationally, Kravitz says “Shalom to Israel, that’s part of my tour plans right about now”. Addressing reports he is simply looking into a private trip he responds “No, i’ll be performing. I know the movie is coming out in Israel right about the time that it does out here, so the movie first and then music”.

The 47yo multi-talent, who is the son of Bahamian-African American “The Jeffersons” actress Roxie Roker and Jewish-Russian former NBC news producer Sy Kravitz, has enjoyed a prolific career in music, with stand out hits such as “Let Love Rule”, “Are You Gonna Go My Way” and “Stand” off his latest cd. Kravitz holds the records for most wins and most consecutive wins after winning four Grammy awards four years in a row for “Best Male Rock Vocal Performance”.

He has also acted in several films, such as “Zoolander”, “Being Mick” and his 2008 NAACP Image award nominated performance in “Precious”, opposite Gabourey Sidibe, Monique and Mariah Carey. His current role is as Cinna on the highly buzzed “The Hunger Games”, for which he is currently busy with doing the media rounds. Soon after Lenny will be free to rock out in Israel.