10 proofs that Eric Cartman is Jewish 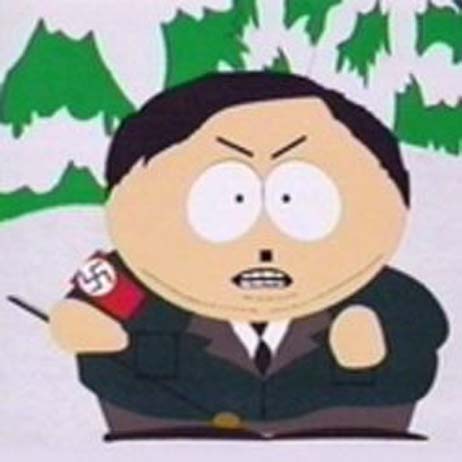 I love Southpark. No, it’s not that I haven’t grown up since Junior High.
OK, maybe…please don’t judge me! But now seriously: the reason why I like it so much is that nowadays, this is the only way to enjoy (very) nether humor as an adult. I mean, where can you find another show that takes all the happenings in this world, as paramount as they may be, and reduces them to the simplest, rejecting and line-crossing toilet-humor? I say only that politics has never seemed so interesting ever since this show was aired. And please, let us have only Idiots as world leaders!

And if you like Southpark, you cannot-not have a special place in your heart for Eric Cartman. This little disgusting, spoiled, furious, homophobic, piggy and foremost anti-Semitic cub…

Giving the fact that all what we don’t want to be was drained into one character (and this character happened to be the anti-Semite), we can all feel comfortable to release a good laughter about him. In fact, it is a relief to see that times have really changed since last time the classic Jew character represented all the bad things in our world.

Now, I can really say that I live in a paradox: I love myself for hating Eric Cartman, and I hate myself for loving him. And out of this contradiction, I thought of a way to settle these mixed emotions: Eric Cartman must become Jewish by all means!

So here are 10 proofs that this mission is possible:

1. Cartman & Cohen Inc. Crack addicted babies, Ass-burgers, Piracy, you name it. Cartman has never missed any opportunity to make profit out of any situation. Truly the master of entrepreneurship. OK, I know, this is not unique only for Jews, but it still counts. Next!

2. Yiddishe Mama. She cleans, she worries, she takes, she buys, she prepares, she allows. Eric Cartman could not have existed without his much-too-caring mother who is sure that her son rocks. BTW, Eric’s father is…well, let’s just say that also Jesus’s father is of no importance. So, Cartman is surely chosen in a way.

3. Ask the Rabbi. I don’t know about you, but it seems sometimes that Cartman knows much more about Jews than the rest of us. Isn’t it?

4. The conspiracy theory. I was recently recommended to read Simon Wiesenthal’s biography. There, the great Nazi hunter describes a special relationship with an Austrian right-winged politician, who has just found out that a few of his ancestors were in fact Jewish. The politician told Wiesenthal that from now on he will be his man inside the Nazi community, and deliver intelligence about former Nazi criminals. In the meanwhile, this politician announced that he is going to be the worst critic of the democracy in Austria. I guess Cartman is not as talented as the Hebrew Hammer, but a spy is a spy. 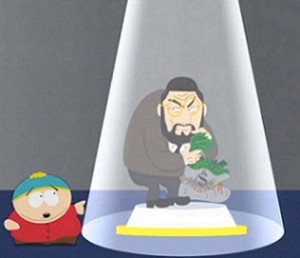 5. One word about fashion. His stocking cap represents a Kippa.  Just sayin’.

6. A very long Shabbat dinner. It’s a custom. Every holiday, the Jews say: “they tried to kill us, they failed, let’s eat”. Only that Cartman never really stopped since then. Definitely a big Mitzvah.

7. The linearity principle. It’s a common Jewish (semi-truth) joke that the Jews are the biggest Jew haters. Could work also vice versa.

8. “Screw you guys, I’m going home”. Is there really a more Zionistic expression than that?

10. One for the road. I know, converting Cartman is hard like slaughtering a kosher pig. But hey, if there is a chance that Hitler was Jewish, I’m sure there is a hope for Cartman.